And today the Jackson Park Band Shell sits tattered, falling into ruin.... THE SHOW MUST GO ON!

A story by Madeline Mazak 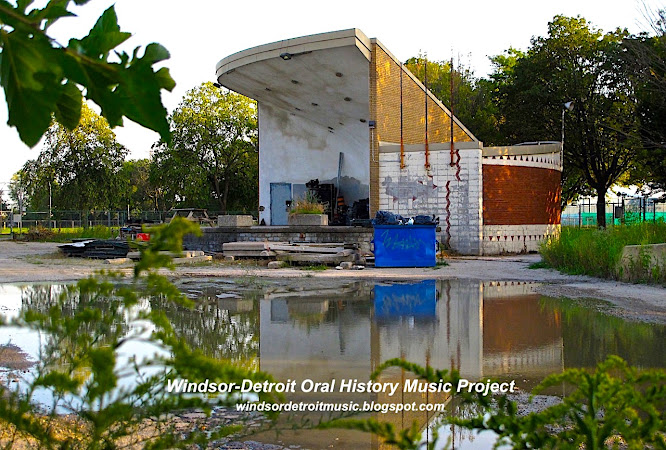 It’s impossible to talk about Windsor music history and disregard the significance of Jackson Park—specifically the band shell tucked away in the southeast corner of the grounds.

Overshadowed by the reaching spires of Kennedy High School and the sprawling fields of Windsor Stadium, the worn-down, mid-century structure, haphazardly covered in debris left by the City of Windsor’s parks department, appears to be nothing special. A quick google search is all it takes to recognize the band shell is anything but ordinary. The stage was host to the likes of Diana Ross and the Supremes (at the time known as The Primettes), The Temptations, Stevie Wonder and many other recognized names. The Beach Boys also performed in Windsor Stadium—the heritage site adjacent to the band shell with a capacity of 3,000—more than half the capacity of the Colosseum at Caesars Windsor casino.

Myself—and I’m certain a handful of other Windsorites—grew up here unaware this historical gem still stands today. If you’re lucky enough to find yourself in pockets of the city’s vibrant music scene, it is likely you’ll overhear someone recalling a time they saw a show at the band shell, or the time their band won the Battle of the Bands—an annual competition that ended every labour day weekend with a bang and drew thousands to Jackson Park. For many amateur bands in Windsor, this was the event of the year.

I remember when I first learned about the band shell. Over a few drinks, Scott “Scotty” Hughes nonchalantly recollected the time he almost electrocuted himself on the stage right before his band Galleon performed in front of a crowd of 2,500 at the Battle of the Bands in 1972. He learned a hard lesson that night: his electric guitar and rain did not mix well. Something about having some “sense knocked into him.” The headline in the Windsor Star the following day aptly read: “Before the light rains, came the thunder…of the bands.”

Naturally, it begs the question: why is the band shell not in use today?

Was it becoming difficult to navigate an increasingly complex web of noise bylaws? Did the City of Windsor decide the stage was better used as a storage space for the parks department? Did the construction of the Riverfront Festival Plaza eliminate the need to maintain an outdoor venue in Jackson Park? Information is not available to definitively say why it stopped being used, but it's fair to say the band shell has been out of commission for roughly 20 years. If this can be boiled down to a deficit in public interest, it is a far cry from the response received after a massive fire burnt the original band shell down in 1957. The band shell was so signifiant to Windsor culture that within three days of the fire, a committee was formed by Windsor Mayor Michael J. Patrick to rebuild the band shell. Construction was completed two years later in 1959. The show must go on.

Today the band shell is fenced off from the public; property of the City of Windsor. It is listed on the Municipal Heritage Register but does not have “designated” status which would protect it from disrepair or from being torn down. Considering the space provided by Windsor Stadium and the band shell, it is no wonder Jackson Park was once the hub for massive events in the city. With a little planning, the park could be home to large-scale events once again.

If you ever find yourself out for a walk in Jackson Park, I recommend making your way to the southeast corner to find the band shell. If you use a little imagination, you may just hear the thunder…of the bands.

Many thanks for this story Madeline Mazak.... photo by Scotty Hughes shot on Aug. 24, 2021

AN IMPORTANT SIDE NOTE: be sure to visit CBC GEM to watch independent filmmaker, Madeline Mazak's documentary: THE JACKSON PARK BAND SHELL - a part of "REEL SHORTS: WINDSOR" visit: https://gem.cbc.ca/media/absolutely-canadian/s21e09

Posted by Scotty Hughes at 4:31 PM

Where Were You in '72 … Tecumseh, Canada, or … “Beer Drinking Around the World”

San Diego native Lester Bangs made Detroit his home during his tenure as editor of the legendary (now defunct) Creem magazine, the original rock music magazine.

Creem dominated the pop culture landscape of the 1970’s while helping to usher in an era where rock music was starting to be seen as worthy of serious (or at least semi-serious) analysis and criticism, and Bangs was a larger than life figure who was probably the upstart magazine’s best-known writer.  A boozy blowhard who became legendary for his gleeful irreverence towards the very rock gods he wrote about and idolized, Bangs was also a world-class tippler who often escaped Detroit to drink himself insensible on the Canadian side of the border.  One of his favourite Windsor-area watering holes was The Golden House, a legendary Tecumseh pub that was a border city landmark for nearly a century before burning down in 1976.

Former Windsor Star music writer John Laycock recalls that Bangs’ presence on the Canuck side of the border became so ubiquitous that he was finally commissioned to write a piece for the Star about his favourite Canadian beers, which he gladly agreed to do once some modicum of payment was offered.  Laycock tells the story that, in those long-ago days before email and fax, Bangs attempted to deliver the article to the paper’s offices in person rather than simply mail it, only to be turned back by Canadian customs officials - apparently due to some previous examples of alcohol-inspired bad behaviour that caused officials to temporarily revoke the rock writer’s border-crossing privileges.

In any event, the article eventually found its way to the Star offices, where it ran under the presumably tongue-in-cheek title “Beer Drinking Around the World” and remains one of the notoriously hard-living writer’s few journalistic endeavours to be devoted to a non-music-related subject.  It is also likely his only known foray into any form of Canadian content.

Story by Christian Bonk
(additional thanks to Doug Down for images, & John Laycock for an interview regarding the story)

Posted by Scotty Hughes at 4:49 AM

Once Upon a Weekend in Windsor 40+ Years Ago

Posted by Scotty Hughes at 3:01 AM

ONGOING RESEARCH & BOOK PROGRESS -- The authors are continuing to collect many interesting interviews and seamy stories (some are suitable for printing), and plan to keep you updated here with those clips and photographs as we progress.  Whether you are a musician, a fan, or just a fly on the wall, we want to hear and see what you have from the distant and/or not-so-distant past.... please keep 'em coming folks!  Feel free to "CONTACT US" via the email link on the left.... many thanks for visiting!

BOOK PROGRESS -- The authors are continuing to collect many interesting interviews and seamy stories (some are suitable for printing), and plan to keep you updated here with those clips and photographs as we progress.  Whether you are a musician, a fan, or just a fly on the wall, we want to hear and see what you have from the distant and/or not-so-distant past.... please keep 'em coming folks! Feel free to "CONTACT US" via the email link on the left.... many thanks for visiting!

Posted by Scotty Hughes at 2:27 AM

The authors were interviewed about the book project by CBC Windsor Radio One host Sara Elliot -- have a listen to that interview here....

INTERVIEW – Local booking agent from the late 60's recalling one of many anecdotes from his day job:


"The problem with my friend (name withheld) is that he did heroin...and I am strictly against any hard drugs, having dealt with it with Iggy...you know, Iggy Pop? That was bad enough...I mean, I one time found Iggy in a friggin' donut shop at 6am in the morning, passed out on a table with girls' gloves on up to the elbow, and girls' sunglasses on, and completely passed out. I was on my way to work, you know, I was trying to beat the traffic when I worked for DMA. So i went over to him, I says, "Iggy...um...look, if I go back to the office and tell them what I've seen here, they're not gonna be very impressed, you're not gonna be getting any work for a while...I mean, you're gonna have to chill this out..." so I gave him a ride home and dropped him off on the way to work...funny but that's kinda how things went in those days."

We welcome story suggestions and visual memorabilia for the book – posters, photos, newspaper clippings, etc. – if you have something you think would deserve inclusion in this book, you can reach us here at: shughes@mnsi.net

SCOTTY HUGHES was born smack dab in the middle of the post-war baby boom. His family moved him to Windsor, Ontario at the age of three months, and since then he has become 'one' with the culture and music of the City and region. For over the past 4 decades his days (and nights) have been spent working as a professional musician, artist, graphic designer and photographer. He has illustrated, designed and overseen publication of various internationally released books, environmental manuals and field guides. His published works have included: sean o'huigin's, Scary Poems for Rotten Kids (1988) (selling over a half-million copies world-wide) and Monster's He Mumbled (1989), and Gerry Waldron's widely popular Canadian best seller, Trees of the Carolinian Forest (2003), and Trees of Point Pelee National Park (2007), and many others.

CHRISTIAN BONK is a Windsor, Ontario native who has lived mostly in Eastern Europe and South Korea for the past 15 years. He was active in the border-area music scene in the late 80's through to the late 90's, having gotten his start behind a drum kit at the age of 14 while sitting in at Abars Island View Tavern, and continues to play to the present day. His writing on literature, culture, dwarf-tossing and other esoteric subjects has appeared in publications such as Mandolyna Theodoracopulous's Takimag and (Canadian VICE magazine founder) Gavin McInnes's Street Carnage. He is currently teaching in the Academic Writing Development Program at the University of Windsor.